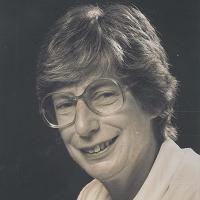 Janet Ruth Stein Taylor was born on October 10th 1930 and raised in Denver CO.  She graduated with a BA from University of Colorado (1951), an M.A. from Wellesley College, Wellesley (1953). Her thesis was A Comparative Study of Brachytic and Normal Zea mays. Thesis Supervisor: Dr. Rhoda Garrison. Her PhD research in Botany, from University of California, Berkeley (1957) was under the supervision of George F. Pappenfuss. Her dissertation was A Morphological and Physiological Study of Three Colonial Volvocales. In 1960 she received the “Dorbaker Award” for the best phycological paper published in North America in 1960.

Between 1957 and 1959, Janet worked as a Technician at Berkeley, and held visiting positions at the University of Minnesota Biological Station, and in the University Teachers Institute at Indiana University.  She joined the UBC Department of Botany in 1959 as an Instructor, and after 5 years on the then traditional path for young women she became an Assistant Professor. Her teaching forte was the smallish class with a strong lab requirement. Many students noted her welcoming experience in 2nd year botany as a major influence in their choice of Botany as at least a minor in the BSc programmes.  Throughout her career she was an effective mentor for undergraduate and graduate students as well as for newly appointed faculty members.  She was probably the last of the ‘put-upon’ women in the Department, and she was certainly a valuable contributor to the fall of male patronage in both the Department and the Faculty of Science at UBC.

During her career (1959-1985), her research interests were in the Freshwater and Estuarine Algae (especially) of British Columbia. She did extensive fieldwork and identification and data base preparation for what is now part of the E-Flora of BC: Electronic Atlas of Plants of British Columbia www.eflora.bc.ca. She established the algal part of the UBC Microbial Culture Collection work that may well have led to her involvement as the Organizing Editor of the 4 volume Handbook of Phycological Methods; published by Cambridge University Press between 1973 and 1986.

Janet was an active member of the scientific societies that she joined, particularly of the  Canadian Botanical Association/L’Association Botanique du Canada (Director; Editor of CBA/ABC Bulletin; Vice-President; President 1970-71)  and the Phycological Society of America (Editor of the News Bulletin and Newsletter; Editor, Journal of Phycology, 1975-1980; Treasurer from 1982-1987; and President 1965).

Over the years Janet taught in the introductory Botany course, brought freshwater algae into the Department, became a stalwart colleague who lead the much respected advising group in the Department, and eventually served as Associate Dean of Science.  She was one of the original authors of the textbook, edited by Bob Scagel, Evolutionary Survey of the Plant Kingdom, by Scagel, R.F., Bandoni, R.J., Rouse, G.E., Schofield, W.B., Stein, J.R. & Taylor, T.M. 1965 Wadsworth Press, Belmont, California.

Janet’s graduate students were a diverse and independent minded group.  The first was Joseph Gerrath (MSc 1965; PhD 1965) who studied the ecology, culture and taxonomy of Desmids.  He married Janet’s undergraduate student/technician, Jean Drewry, and they moved to the University of Guelph, where Joe pursued an academic career until retirement.  Jean did different technical and teaching jobs in Botany at Guelph and 18 years later she extended her Honours degree in freshwater phycology to a career in higher plant morphology, completed a PhD, and became a professor at the University of Northern Iowa.

Dean Blinn (PhD 1969) worked on saline environments and became a career-long faculty member at Northern Arizona University.  John Wehr moved to Durham University in the UK for a PhD (1982) and then onto Fordham University, NY, where he is a Professor and Director of the Calder Ecology Center.  John, and Robert Sheath, a former visitor with Kay Cole, edited a book on Freshwater Algae of North America: Ecology and Classification that was published in 2003.

Martin Pomeroy, Richard Nordin, Helene Contant and Robert Prange all worked in Government.  A post-doctoral husband-wife team, Davis and Diane Findley, from the U S Corps of Engineers, Mobile, AL, contributed much to our knowledge of the ecology of Skaha Lake in the BC Okanagan region during their work with Janet (1969-1971).

Carol-Ann Borden (MSc 1969) did much of the early work on the culture collection, Gary Butler (MSc 1970), Marion McCauley (MSc 1974) and Bob Prange made strong contributions and went along their chosen paths.  Robert Prange (MSc 1976) did a PhD and was last heard of in Kentville, Nova Scotia working on apples!

Janet married Roy Taylor, then Director of the UBC Botanical Garden and moved with Roy to the Chicago Garden in 1985, and then to the Rancho Santa Ana Garden in Claremont CA.  They retired to Nanaimo where both became involved in matters botanical and horticultural and were very active volunteers.

Janet was predeceased by Roy in 2013.

Janet requested no ceremony and only this ‘scientific’ obituary.

I have prepared a more complete biographical commentary in the History of 100 years of the UBC Botany Department, which should be available in a few months through the Botany Department’s web site.