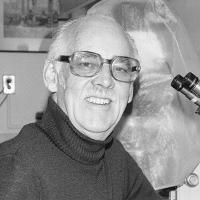 Robert Francis Scagel’s (1921-2018) career's journey began in Ontario where he fine-honed his business skills at a business college. In time he moved to British Columbia and a variety of business-related jobs, including the Boeing Manufacturing plant in Richmond, BC, where Hurricane fighter aircraft were made. A mystic transition found him at the University of British Columbia (A.B. 1947, M.A. 1948) and at Phykos’ Door. Next, U.C. Berkeley and a Ph.D. under Associate Professor George Frederik Papenfuss’s tutelage in 1952.

A joint Oceanography/Botany appointment brought him back to UBC and his second career tract: Academic. The story goes that Dr. Papenfuss assigned the first efforts to study the algal macroflora of the eastern Pacific Coast to himself (California north to the Canada-US border), and north of the 49th parallel to Scagel. In this role he synthesized seaweed literature relevant to the local flora, produced a world class herbarium, based on ten years of intense collecting from Attu, Alaska to Terra del Fuego, Chile, leap-frogging Papenfuss’s domain, and supported numerous graduate students, postdocs, and research associates.

Dr. Scagel developed a ‘Synthetic Approach’ to understanding seaweed distributions, relating known seaweed distributions to coastal oceanographic conditions. This approach resulted in predicting kelp refugia in tropical deep-waters (Graham, et al. 2007. PNAS 104: 16576-16580). I believe this research was important to his being elected a Fellow of the Royal Society, Canada.

Outside of the lab, he guided the Botany Department as Head from 1972-1985. During this period there were several faculty members with algal interests: (J. Stein - freshwater, K. Cole – cytogenetics, B. Tregunna – physiology, T. Bisalputra – ultrastructure, R. de Wreede – ecology, R. Foreman - ecology, cultivation, F. J. R. Taylor – phytoplankton, P. J. Harrison – phytoplankton/seaweed physiology, P. G. Harrison – eelgrass ecology, Luis Oliveira – ultrastructure, Michael Hawkes - red algal systematics, life histories). Wrote David Garbary of this assemblage, “I have always looked back to my years at UBC with pride.  In the 70s and early 80s Bob made that institution a world centre for phycology, and I am humbled to have been a part of that.” Dr. Scagel was editor2 of Phycologia, 1969-1971, and on the organizing committee for the 1st Phycological Congress, 1982.

Following his retirement in 1986, he slipped into his third career, visual artist (https://ginkgostudio.weebly.com/) where he quickly established his exploratory artistic excellence. During his last years, he lived with his son, Rob. His vision, hearing and mobility were ravaged, but his mind remained sharp.

My Phykos Door was opened when Professor Scagel discovered me, pouting, on WestBeach, WhidbeyI., WA., contemplating a career in the gas industry (I would walk gas lines looking for sick plants). He was putting seaweeds in a bucket and I asked him, “What are you doing?” He replied, “Collecting seaweeds.” And I said, “Oh, and who are you?” “Bob Scagel,” he replied. After a few more inane exchanges, Scagel said, “Would like to study at UBC?” Thank you, Bob, thank you for everything. R.I.P.

1Dr. Druehl was a Ph.D. student with Prof. Scagel; completing his thesis, 'On the taxonomy, distribution, and ecology of the brown algal genus Laminaria in the northeast Pacific', in 1965.

Further information on Prof. Scagel's career can be found in Taylor (2017) A History of the University of British Columbia Botany Department 1908-2015. 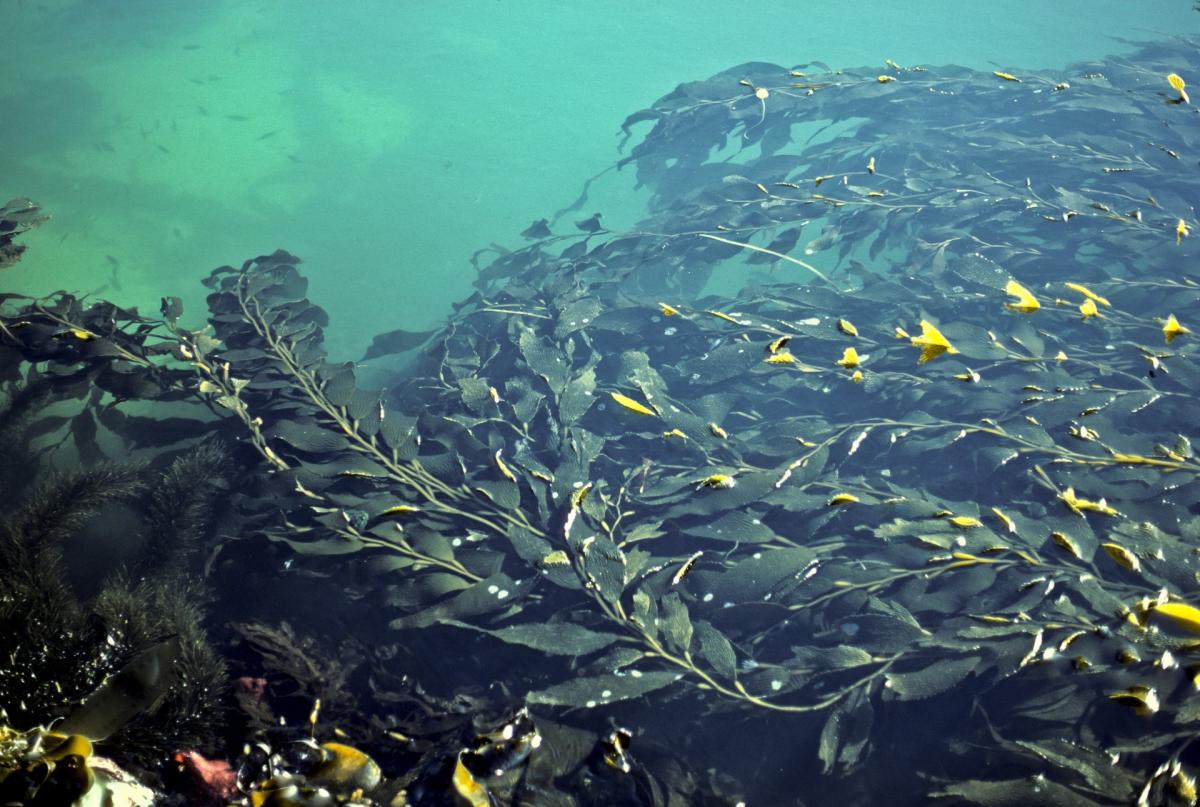 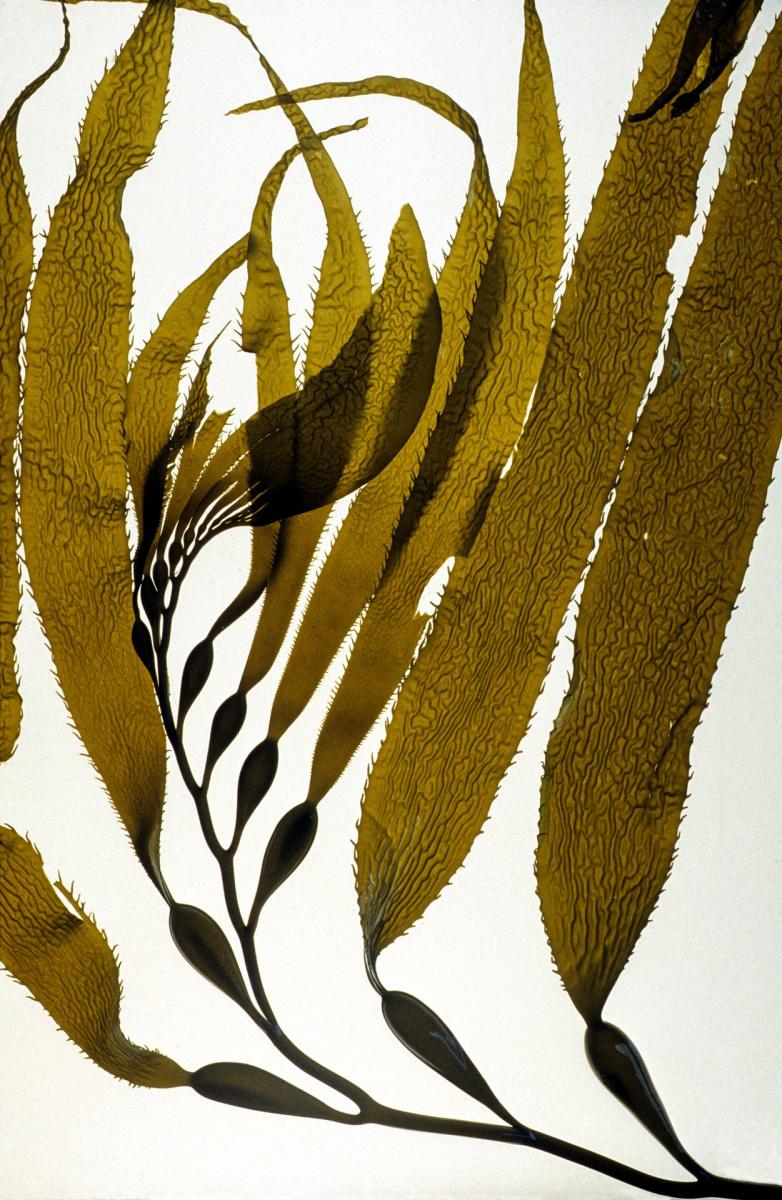 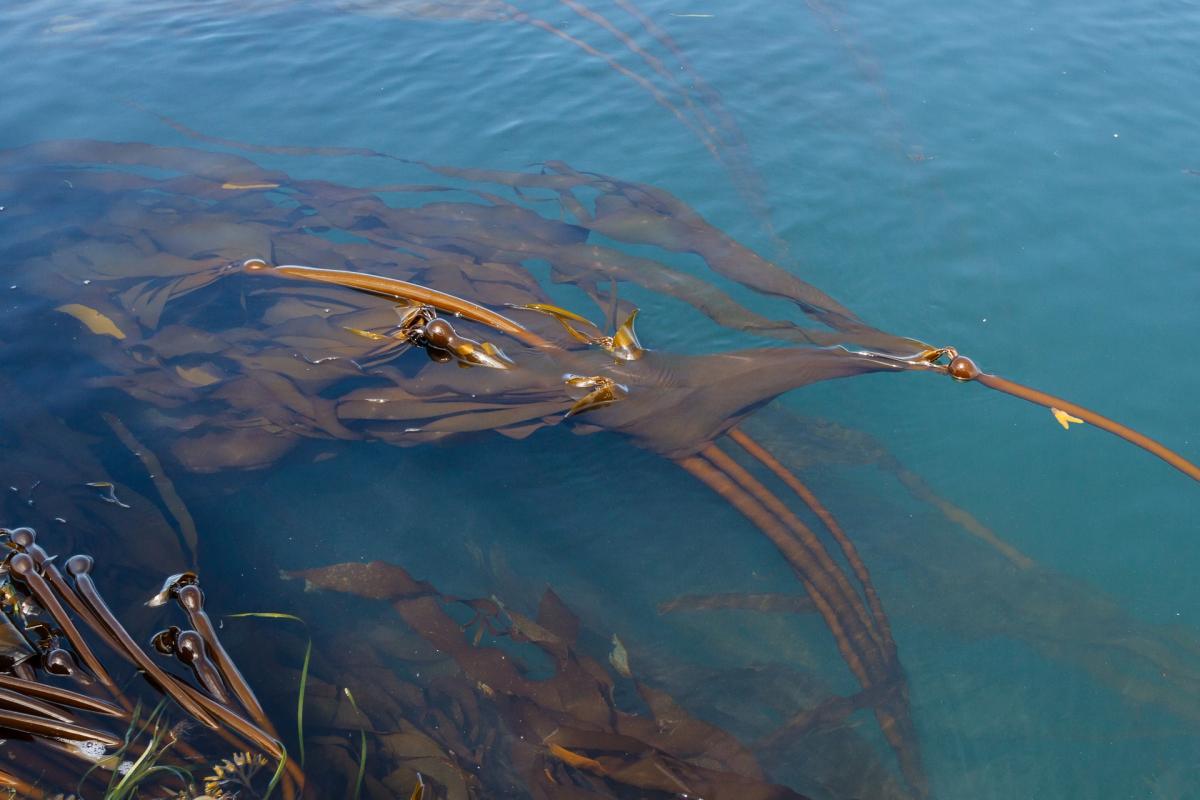 In a paper published just after he completed his B.A. degree at UBC, Scagel (1947) reported on seaweeds, especially 'Giant kelp' (Macrocystis pyrifera) and 'Bull kelp' (Nereocystis luetkeana), in the vicinity of HardyBay, on the NE coast of Vancouver I. This publication was based on field work carried out by Scagel at a station on DeerIsland from July to September 1947. The report focused on the growth, effect of harvesting, and conservation of these important seaweeds. 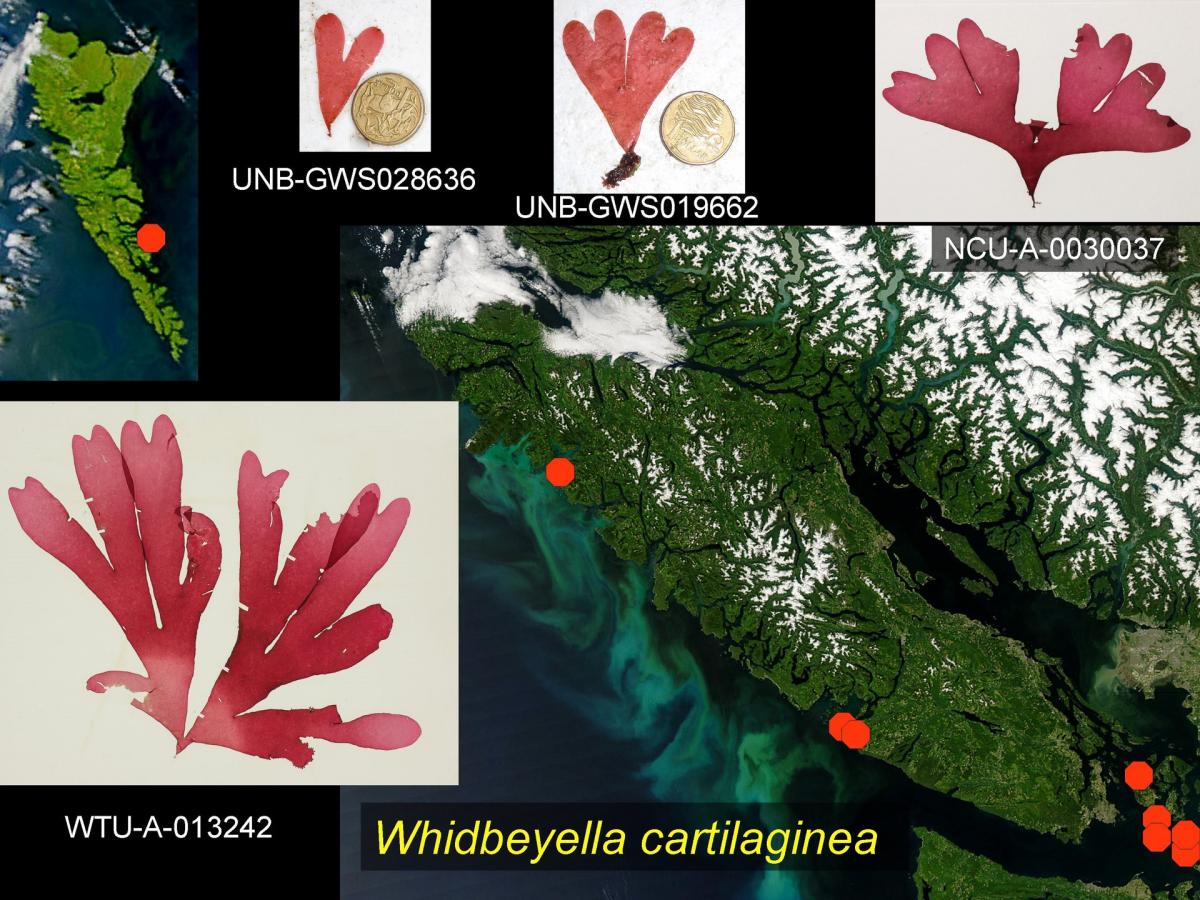 Fig. 4. Whidbeyella cartilaginea distribution as of 2019.

This extremely rare red seaweed was first described by Setchell and Gardner (1903) from a single drift specimen on the west coast of Whidbey I., WA. Scagel (1962) published the first account of the reproductive anatomy of the monotypic genus Whidbeyella, based on a collection from near Smith I., WA. Scagel also reported on the largest known specimen of Whidbeyella (lower left corner of Fig. 4) collected by Mike Neushul at Hein Bank, WA and photographed by Shirley Sparling while at the University of Washington's Friday Harbor Labs, San Juan I. 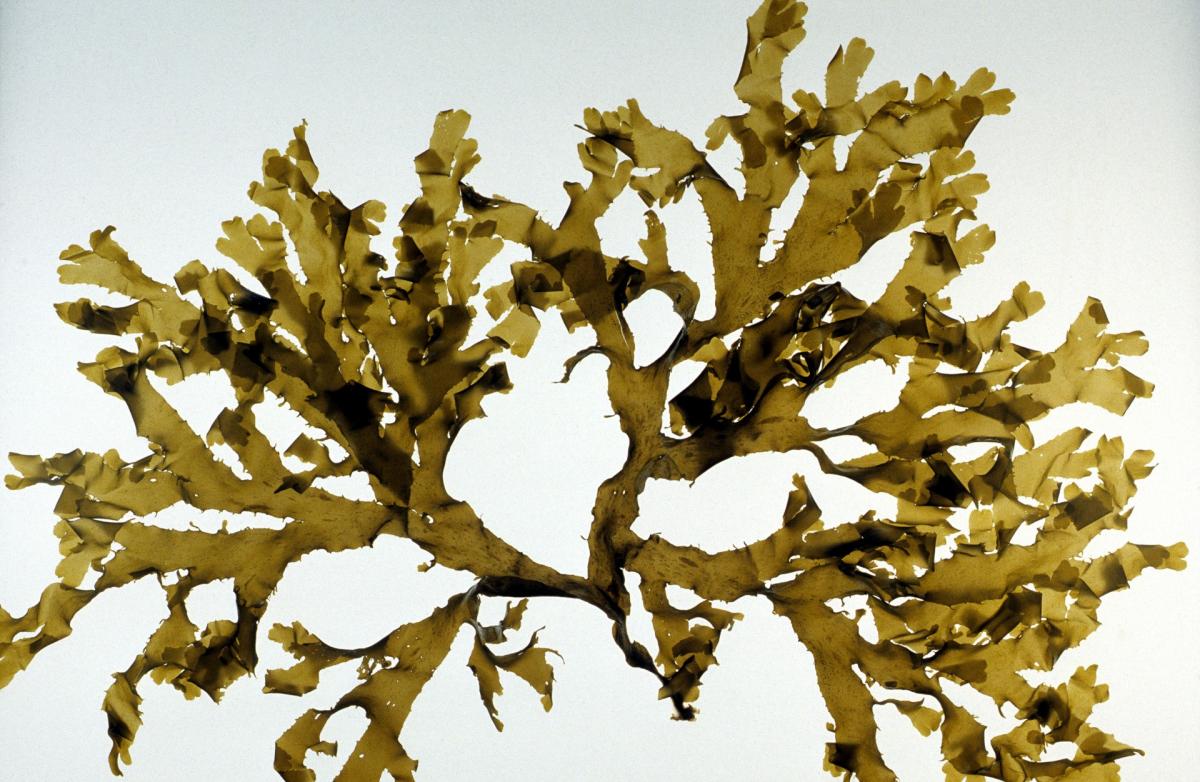 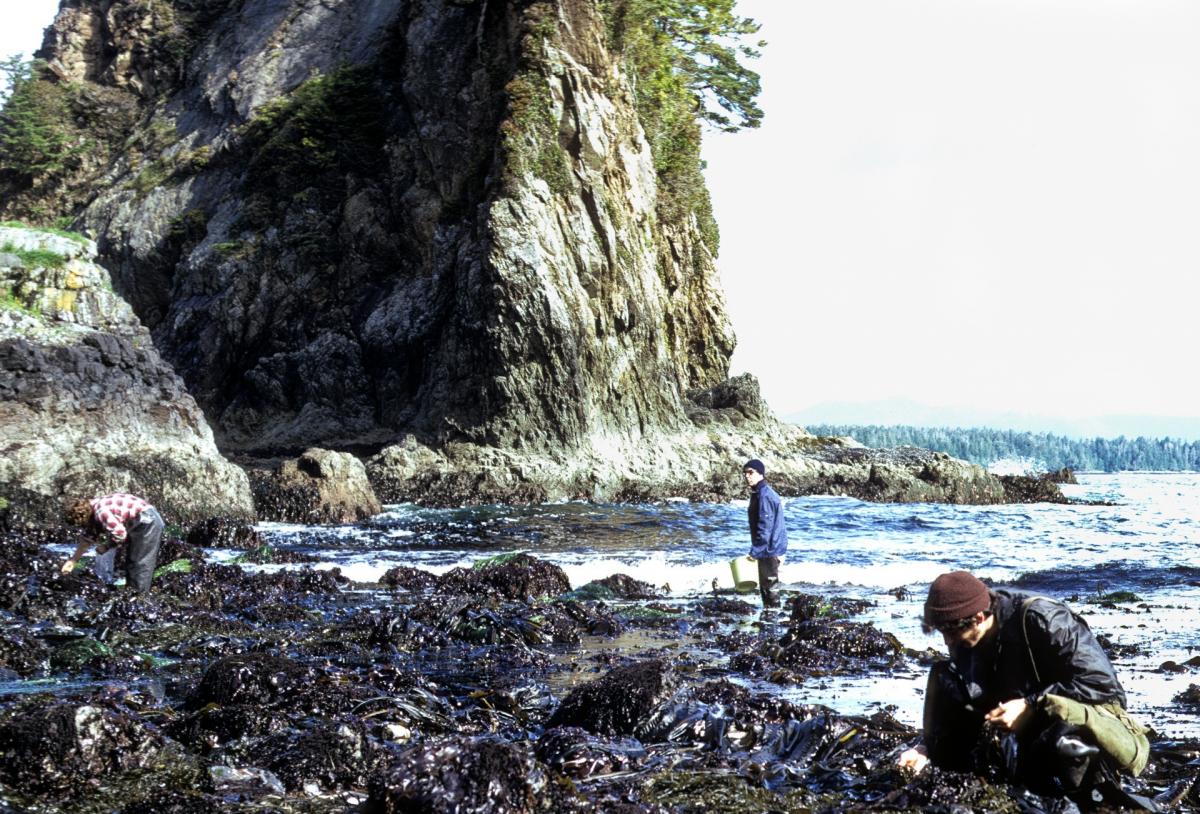 Fig. 6. Bob Scagel and students collecting seaweeds at Kiix-in1 (pronounced KEE-shun in the Ohiat language), Barkley Sound, Vancouver I., BC, 10 May 1974. Kiix-in was once the capital community or main village of the Huu-ay-aht group of the Nuu-chah-nulth First Nation. Declared a National Historic Site in 1999, it is close to the Bamfield Marine Sciences Centre. Scagel (1973) published the first synopsis of benthic marine plants in the vicinity of Bamfield. 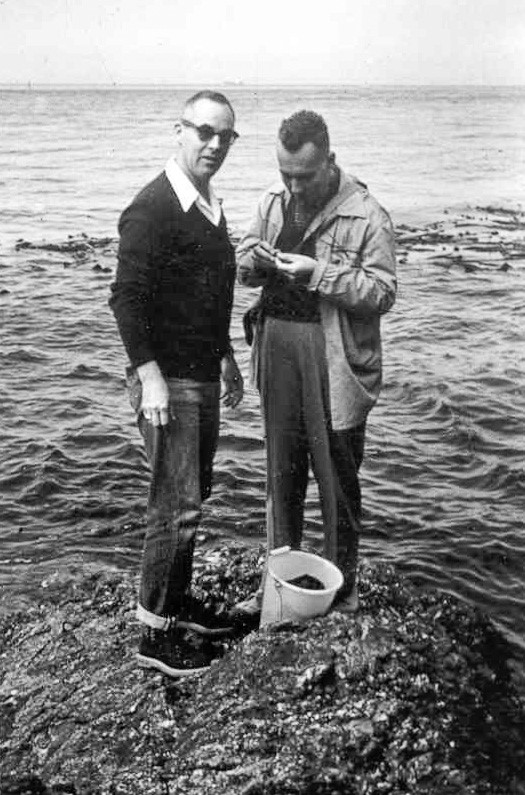 Fig. 7. Bob Scagel and Jean Feldmann (France) collecting seaweeds at Point No Point, near Sooke on the SW coast of Vancouver Island in 1959.

In an email (9 Dec. 2002), Scagel told the story of this field trip to some former students and colleagues (Widdowson, Druehl, Hawkes, Gabrielson, and Lindstrom).  It is worth quoting here ...... "I first met Feldmann in 1955 when I visited him in Paris and in the summer of 1959 as part of the International Botanical Congress in Montreal when I led a small field trip of several days duration to Vancouver Island (Sooke and Port Renfrew).  That field trip was unique, because it comprised only five of us – fitting into one station wagon:  Feldmann, Yamada, Helen Blackler (from St. Andrews University), Ron Taylor from New Brunswick and George (whose surname I have forgotten) from San Francisco.  We stayed several nights at the Point No Point Motel in three separate cottages.  Helen Blackler by herself in one cottage; Feldmann and Yamada in one cottage; and myself and the other two in a third.  I often thought afterward that Feldmann and Yamada must have made a curious pair:  At that time Feldmann spoke very little English and Yamada spoke very little English! The following year Yamada came to Friday Harbor where we shared in offering the course in “algology”.  That field trip was also unique in one other sense:  Helen Blackler had been visiting a relative in Victoria prior to the field trip and was just recovering from the “flu”.  Our first night at Point No Point she was ill and lost one of her dentures (upper or lower, I don’t recall) down the John.  Recovery was impossible, so I spent part of the next three days driving her back and forth to a dentist in Sooke.  By the time we left, she probably went back to Scotland with one of the finest sets in Scotland. That field trip was also unique in that, courtesy of the Canadian Navy, we made a side trip from Victoria to Friday Harbor (and a dredging trip on the Hydah).  We made quite an impression on the Friday Harbor residents and Marine Station with our naval escort." 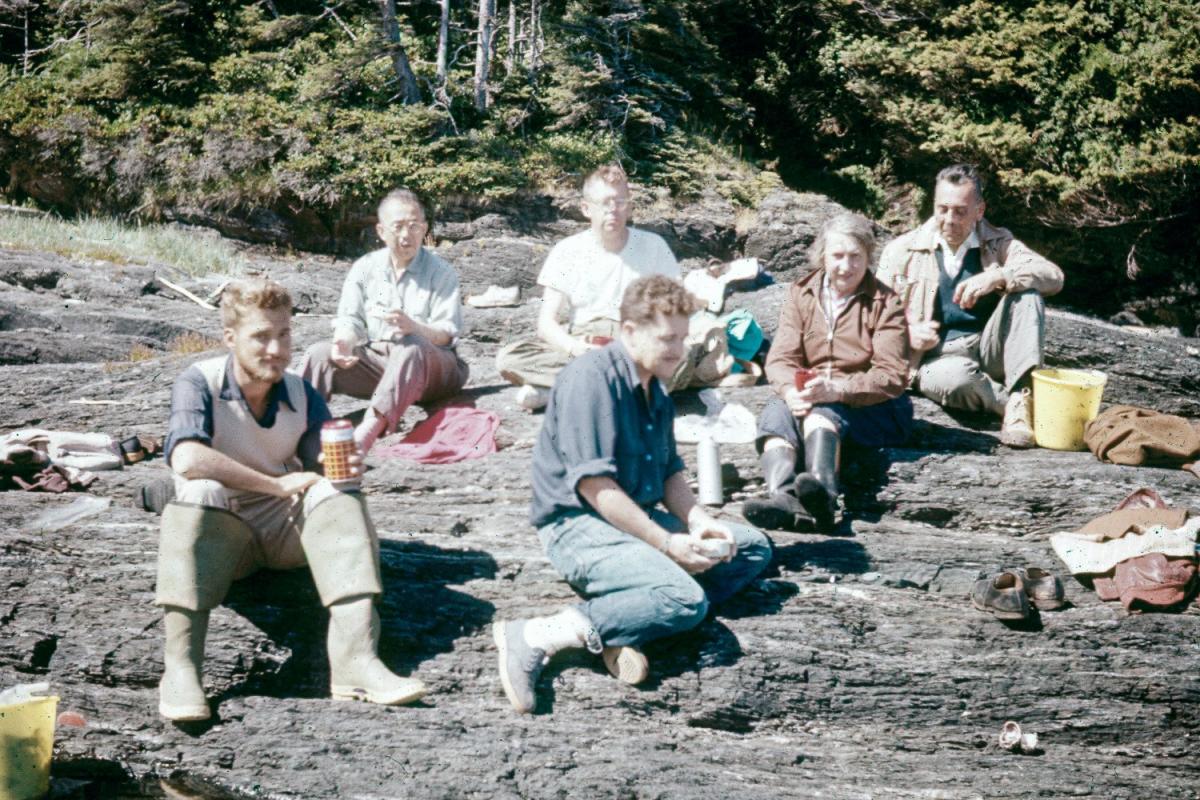 Fig. 8. Tom Widdowson (then doing his Ph.D. with Scagel), Y. Yamada, Ron Taylor (back), George ? (front), H. Blackler, and J. Feldmann at Botanical Beach,  1959. Continuing Scagel's story of this field trip (email 9 Dec. 2002)..... "Our trip to Botany Beach at Port Renfrew was also noteworthy.  In those days, as Tom will no doubt recall, we parked in the village of Port Renfrew and hiked over the remnants of the old plank road.  During the field trip, Feldmann wore a pair of open plastic sandals, one of which he lost on the way back over the plank road.  When the field trip ended we provided space in the Botany Department [at UBC] for those who had specimens to mount to do so. Julie [Celestino] changed the blotters and completed the drying and we mailed the specimens to them. In the meantime, Feldmann’s sandal was recovered, and we mounted it on a herbarium sheet and sent it back to Paris with his specimens." 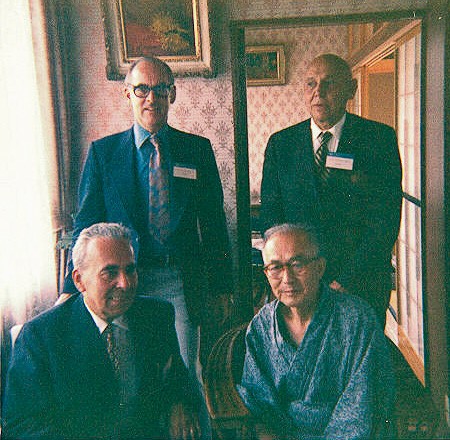 Fig. 9. Four distinguished phycologists. Sapporo, Japan, Aug. 1971. Scagel (email 9 Dec. 2002) also provided the story for this photo ..... "This picture was taken by Jun Tokida during the 7th International Seaweed Symposium in Sapporo.  I had met Tokida and Yamada when I visited Sapporo in 1957. Tokida, whose English was quite good,  came from Hakodate to Sapporo to meet me. When he met me at the airport he was holding a big sign that said “welcome Dr. Scagel”. He had borrowed the chauffeur and limousine of the President of Hokkaido University. The following day they took me on a field trip to the marine station at Oshoro (I think) in the shadow of Mt. Yendo - the first time I ever went on a field trip in a chauffeured Cadillac! The mountain nearby was apparently named after Yendo after his return from  the University of Chicago and he was allegedly responsible for introducing skiing to Hokkaido on his return to Japan. In 1971 Yamada was in failing health and was living with his son in Sapporo. Tokida took the four of us (in the photograph) by taxi to visit Yamada.  Those in the picture are left to right:  seated Jean Feldmann and Y. Yamada; standing RFS and G. F. Papenfuss. 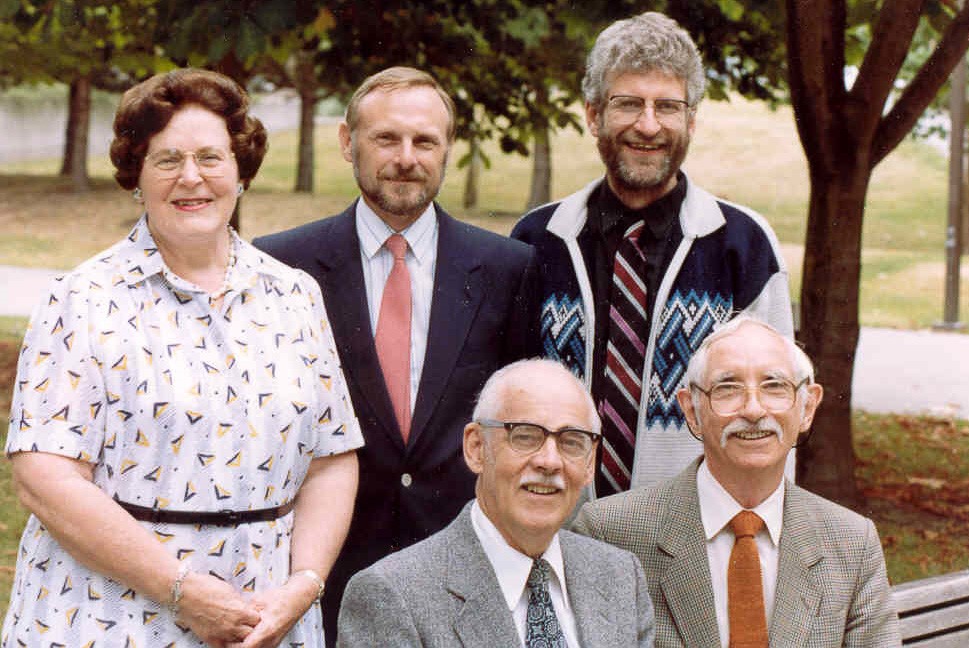 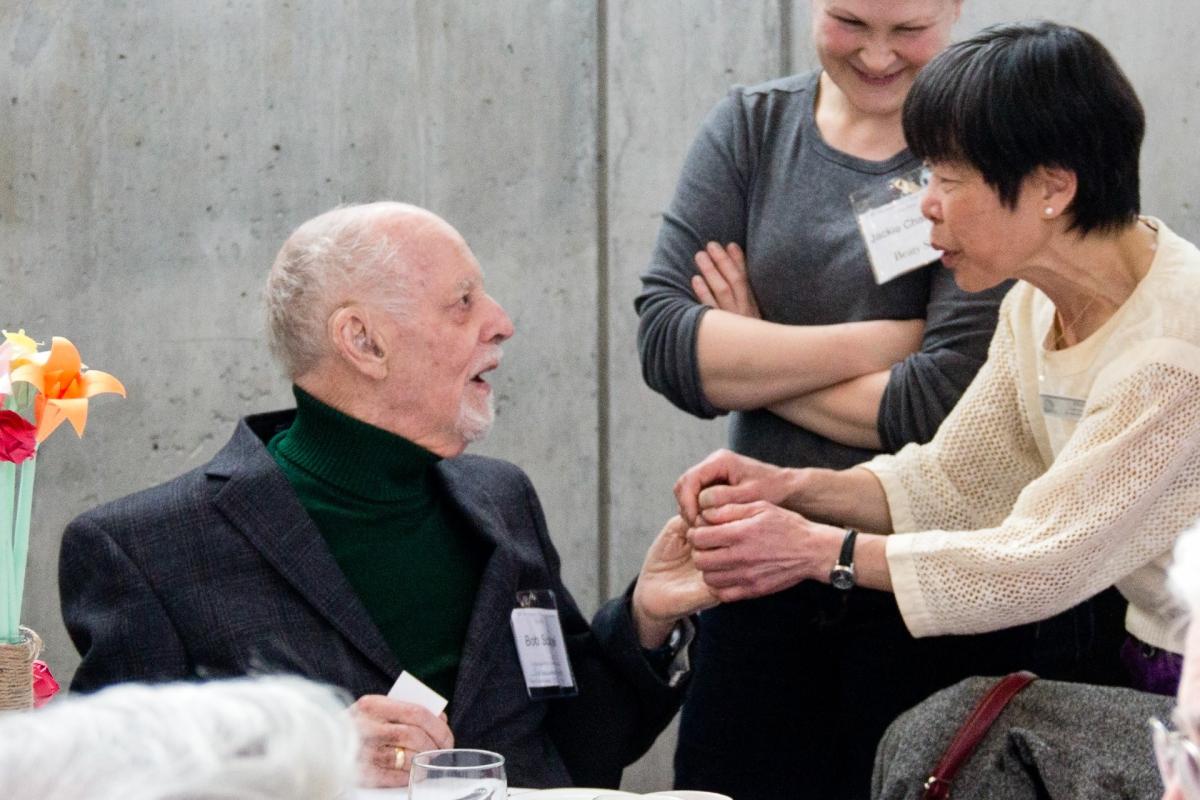 Figs. 1-6 and the portrait of RF Scagel on the 1st page: Michael W. Hawkes.

Thank you to Dr. Scagel's son, Rob, for bringing this video to my attention (MW Hawkes).

Scagel, R. F. 1964. Some problems in algal distributions in the North Pacific.  Proceedings of the International Seaweed Symposium 4:  259‑264.