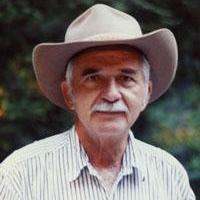 Professor Emeritus Robert (Bob) Joseph Bandoni passed away peacefully on May 18, 2009 at Mountain View Manor Extended Care Unit in Ladner, B.C. Bob was born November 9, 1926 in Weeks, Nevada to Giuseppe and Albina Bandoni, and graduated from high school in Hawthorne, Nevada. He earned degrees from the University of Nevada at Reno and the University of Iowa before joining the faculty of the Department of Botany at the University of British Columbia in 1958. Following his retirement from the Botany Department in 1989. Bob maintained an active presence both within the Botany Department and in the wider mycological community. He is survived by wife Alice-Ann (Webb) of 20 years, daughter Susan (Thomas) Muench of Geneseo, New York, stepsons Danai (Angela) Bisalputra and Rabin Bisalputra, and sisters Margaret McGhie of Nevada, Evelyn Smith of Illinois, and Mary (Frank) Fahrenkopf of Virginia. Predeceased by wife Inger (Van Nostrand) of 30 years, and siblings Estelle Perry, Grace Bandoni and Alfred Bandoni.

A celebration of Bob’s life will be scheduled for September. Condolences can be expressed on line at www.deltafuneral.ca. In lieu of flowers, please send contributions to the Delta Hospital Foundation (5800 Mountain View Blvd., Delta, B.C., V4K 3V6, or www.deltahospital.com).

As a biologist, Bob was drawn to strange, diverse, and inconspicuous basidiomycete fungi. He was both a superb naturalist and an attentive scientist. By searching in places where no one else looked, he found many of the ‘duck-billed platypuses’ of the fungal world, fungi with astonishing and unexpected combinations of characters that helped reveal patterns of early fungal evolution (Bandoni and Oberwinkler 1981; Oberwinkler et al. 1990).

Bob specialized in the Tremellales, and Jack Maze recalled:

I first became aware of Bob while taking a course in Mycology at U. Wash. from Dan Stuntz. When we got to the Tremellales, Dan and one of his students, Hugh Klett, spent a great deal of time praising Bob Bandoni and the quality of his work. Thus when I arrived at UBC in 1968 I was quite excited to realize I'd get to meet Bob. I did and my first thought was, "Geez, he's old." Bob then was in his early 40s but I was a mere kid of 31, an age at which anyone over 35 was suspected of having ridden in on a glacier. It was always pleasant to encounter Bob. In the hall, he could extract the glumness from a typical day in academia with humor or just an irrevant comment, often in more colorful language than is commonly heard in the halls of academe. In meetings, Bob's comments, while rare, were also a pleasure to hear, and were often useful. He usually kept his own council in meetings, aside from private remarks on various things, some of them germane to the meeting. But when necessary he had the ability to use a few pithy remarks to place a discussion in perspective, usually in the context of what was being discussed was a waste of time and, if the ideas presented were carried out, would be an even greater waste of time. These opinions were based on a combination of knowledge and experience, things at which Bob excelled.
--Jack Maze