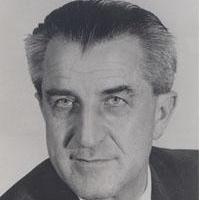 Vladimir Josef Krajina was born at Slavonice, Austria-Hungary (now Czech Republic) on 13th April 1905. He was educated at Charles University, Prague, where he graduated with the earned degree of D.Sc. cum laude in 1927. In World War II, he was a leader of the Czech underground resistance for which he received both military and civilian honours. “The hero of the democratic underground was Professor Vladimir Krajina,” wrote Korbel (1959, p. 55).  After the war, he returned to Charles University as a professor.  He was elected to the Czech parliament in 1945 and served as General Secretary of the largest democratic Socialist Party when the government was led by Jan Masaryk. When the communist government took over in 1948, he was forced to seek safety abroad. Vladimir was a great fighter for liberty. He put his life on the line for democratic freedom, and had the dubious distinction of being sentenced to death by both the Nazis and the Communists. Vladimir and Maria opened their home to refugees from Czechoslovakia and their hospitality was legendary. His name was an internationally known by-word for Czechs all around the world.

He immigrated to Canada in 1949 and joined the UBC Botany Department in 1949 where he taught plant ecology for 24 years. His knowledge of plants, their distribution and ecology was encyclopedic, his field trips were hectic, and his slide shows were legendary. He supervised many Ph.D. students, many of whom went on to leading positions in ecology. His major contributions to Canadian botany were to develop the ecologically-based system of vegetation classification (Biogeoclimatic Zones) now widely adapted and used as the basis for forest management in BC and Alberta. He used his political experience and acumen in the successful campaign that led the establishment of more than 100 ecological reserves in British Columbia, a feat unmatched anywhere in the world.  This system has been studied and adopted in several parts of the world, including Western Australia.
He was honoured during his lifetime with honorary degrees including the D.Sc. honoris causa from UBC, and was invested into the Order of Canada in 1981. Vladimir died on June 1st 1993. The Department of Botany continues to honour him with the annual Vladimir J. Krajina Memorial Lecture.

Several film documentaries and works provide insights into his life and attainments.  Many of them are in Czech including Krajina’s Vyoská hra (“High Game”) published by Nakladatelstvi VTA, Prague, 1994.  Some selected works in English are given below.